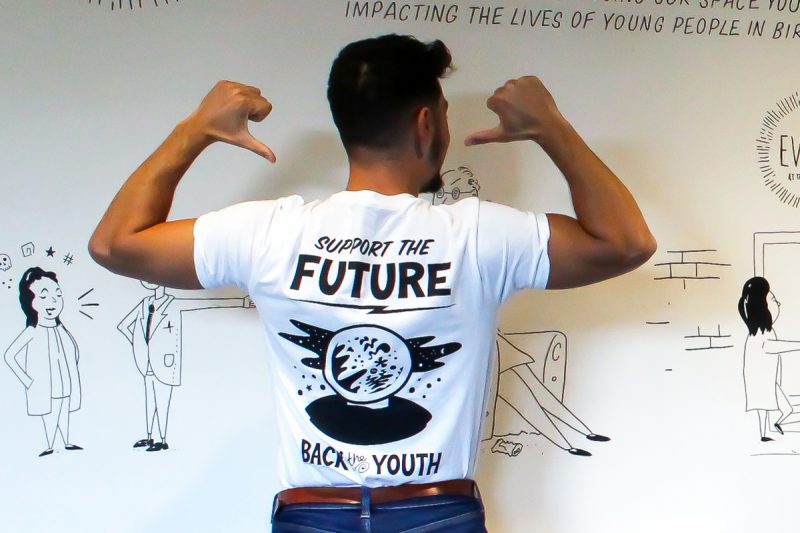 Exchanging teas for tees, Evolve has teamed up with the region’s infamous satire artist, Foka Wolf, to issue an urgent call to action for Birmingham to support its young people with a limited edition t-shirt; the proceeds of which will go towards funding the social enterprise café’s work-placement schemes for those aged 16-25.

With stats showing that Generation Z has been the hardest hit by employment cuts in light of the ongoing pandemic, Foka Wolf – the artist touted as ‘Birmingham’s answer to Banksy’ – wanted to put pressure on the city to do the right thing and fund opportunities for young people. He drew up the t-shirt design with an appeal for the region to ‘support the future; back the youth’ – before it’s too late.

Having heard of Evolve’s role in creating job opportunities, training schemes, and fully-funded work-placements for young people facing barriers to employment, Foka Wolf knew he wanted to use his talent and his platform to raise the profile of the work being done. He said:

“So often, businesses take the path of inaction because it’s easier to say ‘it’s not possible’ or ‘I don’t know how’ than to create the job roles that are so desperately needed. I’m tired of seeing corporations use the younger generation as scape-goats, shirking their responsibilities as employers, and never getting called out for it… it needs to change, and it needs to change now.

“I’ve been following the work of Evolve for a while and, for me, it just goes to show that the changes are in fact more than possible: they’re impactful, effective, and in many cases life-saving. I wanted to collaborate with Evolve to put the spotlight on what the team has achieved and show that if an independent social enterprise café in Birmingham can do it and thrive, then the multi-national companies have no excuse anymore.”

With its reputation secured as a coffee-shop with conscience, Evolve is no stranger to serving up positive change. Established in 2017 to provide young people facing barriers to employment with training, qualifications and job opportunities, Evolve has since worked with more than 30 young people. During their placements, Evolve has offered its employees over 1,000 hours of one-to-one support, and with its pioneering approach it has seen 70% of them go on to be employed full-time or enter further education.

The collaboration t-shirts with Foka Wolf are the latest initiative that Evolve has under its belt. Not only has it reopened as a dedicated wellbeing café in the post-lockdown ‘new normal’; it has also partnered with CHK Foundation to deliver a new service called ‘Nurture @ Evolve’, adapting its tried-and-tested methods to support businesses in creating placement schemes for young people who have a history of substance/alcohol misuse.

The t-shirts are available to buy now and are £25.

To buy yours, head to Foka Wolf’s shop https://megacorpglobal.com/product/back-the-youth.

To find out more about what is in store for Evolve’s Adam and Eve and Pebble Mill sites, visit: www.evolvebirmingham.co.uk.