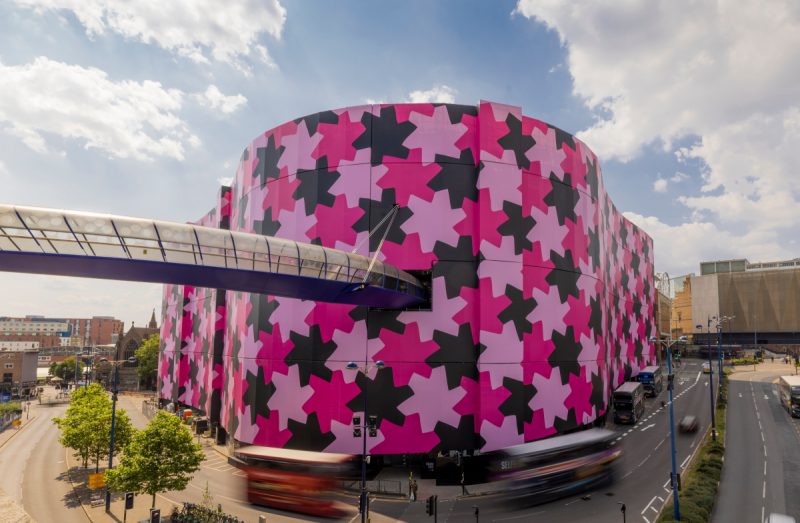 This new art installation, co-commissioned with Ikon, Birmingham, entitled Infinity Pattern 1, is dramatically changing the Birmingham skyline as it stretches over 10,000 sq. meters (nearly 50 meters in height and 250 metres in length and weighing 5 tons).

A radical new landmark for the city, Infinity Pattern 1 addresses the issues of race, labour and migration, which have shaped Birmingham’s past and present, but also carries a deep sense of optimism, connectivity and hope. For Osman, who is Birmingham-born, and the son of Pakistani-Afghan migrants, the work contains some autobiographical elements, but at its core it stages the concept of a world without borders, whether physical or imaginary, represented by the endlessly tessellating pattern. This major public artwork – part of Selfridges long-established commitment to supporting creativity in the cities its stores call home – will remain in its completed state until the end of the year. It will be dismantled progressively next year whilst major renovation work to the store, started last winter, come to an end just ahead of the Commonwealth Games. Osman’s installation was chosen following an international competition led by Ikon, Birmingham, the highly esteemed art gallery.

The commission is complemented by an in-store art exhibition, shop and art trail (also opening on 26th July) all co-designed and co-curated with Ikon, as part of an ongoing creative relationship between the gallery and the store. The art exhibition and trail will expand the conversation around some of the topics raised by Infinity Pattern 1, through further new works by Osman, as well as pieces by Birmingham artists Hira Butt, Farwa Moledina and Maryam Wahid, to discover within Selfridges Birmingham store.

Osman’s additional output was developed through a recent residency at Birmingham’s School of Art in Fine Art Printmaking and Sculpture. The new pieces are anchored by a series of mixed-media works on paper, challenge  the stereotypes of ‘The Model Migrant’ and the perception of the role of Brown Bodies in the Western world.

The exhibition shop showcases an exclusive collection including tote bags, blankets and vegan leather accessories all featuring the distinctive Infinity Pattern 1 design, alongside a curated selection of products celebrating the city of Birmingham.

Osman Yousefzada said: “The work is entrenched in autoethnographic elements of migration, community formation and how they happen, interact and settle. The work reflects my personal story and more widely my ethnic history and some of the symbolisms inherent to my culture.”

Selfridges Creative Director, Hannah Emslie said: “Selfridges is celebrating the communities of Birmingham through a unique art commission that represents both optimism and transformation. This new work by Osman Yousefzada is uplifting but also meaningful and deeply connected to the fabric and culture of the city. By changing the skyline – at a time when the city itself is changing – we hope to make the world brighter through creative expression, and the people of Birmingham even prouder of their iconic city.”

Jonathan Watkins, Ikon Director said: “After leading the search for an artist to work with Selfridges it’s exciting to see the transformation of Birmingham’s skyline thanks to Osman Yousefzada’s “Infinity Pattern” enveloping this iconic building with extraordinary visual impact. The work smartly conveys his ongoing preoccupation with the nature of cultural identity, a basic human need for belonging and the experience of migration, and these themes will be developed further through an exciting programme of events taking place instore as part of Ikon’s Migrant Festival in August. It couldn’t be more right for this city.”