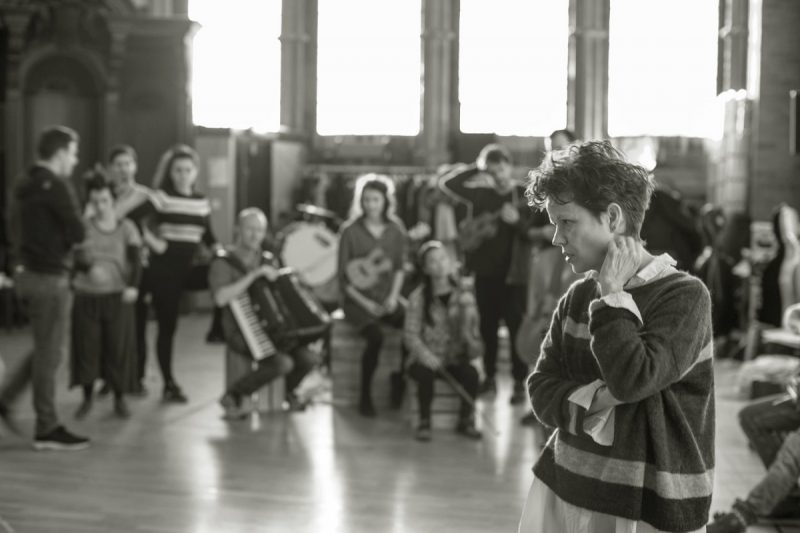 We caught up with the director of Belgrade’s latest production, La Strada which premiere’s this Monday 13th February.

When did you first encounter Fellini’s La Strada?

I saw the film when I was quite young. My father was very keen on the film, so I watched it and didn’t understand what it was about but I was intrigued by it. I loved the cinematography, and the music, and the strangeness of it, and I was beguiled by the character of Gelsomina. I watched it again when I was a drama student and became a bit of a Fellini fan.

What inspired you to put La Strada on the stage?

It was Kenny (Producer) who asked me whether I was interested in adapting it and of course as soon as he mentioned the film title, I was immediately hooked because of my interest in the film. I knew it was always going to be a challenge and part of me felt that you can’t take on a Fellini film. It’s so iconic, why would you want to do that?! As I started to think about it more and more, and watched it again and again, I realised that the story is a universal one and if I was going to turn it into a piece of theatre, I wouldn’t be trying to put Fellini’s masterpiece on stage. I would be responding to the film, using it as inspiration and trying to get to the heart of the story which feels very ‘folk tale.’ It has a kind of universal quality to it that is a timeless story that could be told a thousand years ago and for today as well. So, it was the story that really made me think this could make an interesting piece of theatre.

What do you want audiences to experience from this production?

I think stories are at the heart of theatre. I always want my audience to be provoked in some way and reminded of what it is to be human. I think that’s what I’m always looking for when I make a piece of theatre – what is this story saying about our lives today? How can it connect with us now? I think, at its heart, it’s about a struggle to understand what it is to be human. For Gelsomina, who is the protagonist in our version, we’re seeing the story through her eyes. She is struggling to survive, but she is someone who, regardless of what is happening around her, has this incredible spirit and this wonderful sense of the possibilities of life. I think that is a central theme for us in telling this story.

Tell us what is involved in the process of devising?

Well devising is how I’ve always made theatre. It essentially means that I don’t start rehearsals with a concrete script. The script emerges during the process and everybody in the production is involved in responding to the source material – the creative team, the actors, everyone who is in the room devises together. It means we have to be a very strong team and the collaboration is at the heart of how we make the work. Each process is completely different because I’m always working with different actors, so their particular response to something informs how we make this piece.

Will this production involve live music?

Yes, absolutely. I always like working with performers who are multi-talented. It’s so tough for actors these days – they have to be able to sing, dance, act brilliantly and play instruments and they’re doing all of that in this show – and be circus performers! Bart (cast member) is a wonderful circus performer and he shows off his skills in this show, but they all play instruments and sing. That provides a real delight for the audience.

Will this be quite a physical production?

I like to try and find a way of exploring some of the themes, some of the ideas, some of what happens, not just by relying on the spoken word. Text is important, but I’m always interested in, how we can tell part of the story, without using words and that sometimes takes a lot of tearing your hair out and pounding your fists on the floor in frustration but, for me, those are the ways of really getting under the skin of the piece and finding the subtext. We’re discovering that as we rehearse, lifting it off the page and finding an imaginative way of telling an aspect of the story and that’s for me, one of the most thrilling aspects of devising.

Why should audiences come to see La Strada?

I think audiences should come and see this because it feels like an important story to tell. Stories unite us and at the moment I think we feel un-united. This is a good reason for coming together and sharing a story.

La Strada makes its UK premiere on the Main Stage at the Belgrade Theatre from Mon 13 – Sat 18 Feb. Tickets are available now by calling the Belgrade Box Office team on 024 7655 3055 or visit www.belgrade.co.uk for cheaper tickets online.