Curve has announced its 2020 reopening plans, including performances of a trio of Made at Curve favourites – The Color Purple in concert, Sunset Boulevard in concert and Memoirs of an Asian Football Casual.

The theatre, which was forced suddenly to close its doors to the public on 16 March, will open again this autumn for spectacularly re-imagined, socially distanced concert performances.

Ria Jones and Danny Mac will return to star in Sunset Boulevard; T’Shan Williams and Danielle Fiamanya, who won The Stage Debut Award for Best Supporting Actress in a Musical for her role as ‘Nettie’; will star in The Color Purple.

By raising the walls between its theatre spaces, Curve will reopen as a 533-seat socially-distanced auditorium, with audiences enjoying live performances from all four sides of the stage, fully realising the ambition of architect Rafael Viñoly’s original design. A triple-revolve, donated by Sir Cameron Mackintosh, will help to transform the space to create an epic experience for audience members.

The season will officially launch on 12 Nov with an exclusive event which will be live-streamed from the theatre.

Curve’s reopening plans are only possible due to grant funding received from the government’s Culture Recovery Fund and the ongoing support of Arts Council England and Leicester City Council. 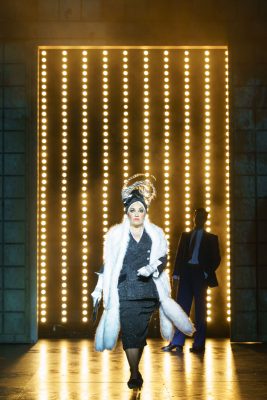 Curve has also reaffirmed its commitment to developing new work. A group of local creatives and theatre makers across a variety of disciplines will take up residency at Curve in the new year. The full cohort of Curve Resident Creatives will be announced in the coming months.

As the building reopens for performances, Curve will also welcome back its Curve Youth and Community Companies and local Curve Associate Artists and Groups who have continued to engage in classes with the theatre online whilst the building has been closed.

Speaking about the plans, Chris Stafford and Nikolai Foster said:

“COVID continues to have a devastating impact on our industry and we are indebted to Arts Council England and DCMS for the Culture Recovery Fund which will help us plan a future for Curve.

“Although we have a long road to recovery ahead of us, we are delighted to announce a new programme of work which will reopen our theatre after seven long months of closure. The team at Curve have worked tirelessly on plans to enable us to safely reopen our theatre with social distancing. Curve’s unique architecture has always demanded a bold response in whatever we do, and we are proud to present these performances in our newly configured, socially-distanced, in-the-round theatre which merges our Studio and Theatre into one performance space. The Color Purple, Sunset Boulevard and Memoirs of an Asian Football Casual celebrate all that is great about Leicester and our theatre: community spirit, resilience and the irrefutable transformative power of culture and theatre in all of our lives. Alongside these performances, we look forward to welcoming our Curve Youth and Community Companies, Associate Artists and Resident Creatives back into the building.

“We couldn’t be more grateful to everyone who donated and supported Curve during this temporary closure, in particular our principal funders Leicester City Council and Arts Council England. We would also like to extend our grateful thanks to Cameron Mackintosh for the loan of the revolving stages used in this special autumn re-opening season; Cameron and his team have been incredibly generous and supportive throughout the lockdown and we are most appreciative to all of them for their support.

“Curve plays an important role in the life of our city, and in reopening our theatre we will be able to play a part in helping revitalise Leicester from the continued impact of this pandemic. We look forward to welcoming our audiences, participants, staff and 100s of freelance artists back to Curve and the City Centre this autumn.”

To ensure audiences are able to safely enjoy a return to Curve, the theatre has introduced a number of new measures throughout its building, including a one-way system, additional cleaning and temperature checks before entry to the building. Further information can be found on Curve’s website.

Tickets for all shows in Curve’s upcoming season will be on sale to Friends from Thu 15 Oct, Supporters from Fri 16 Oct , Members from Mon 19 Oct and on-general sale from Wed 21 Oct, all at 12 noon.
FOR MORE INFO VISIT: www.curveonline.co.uk