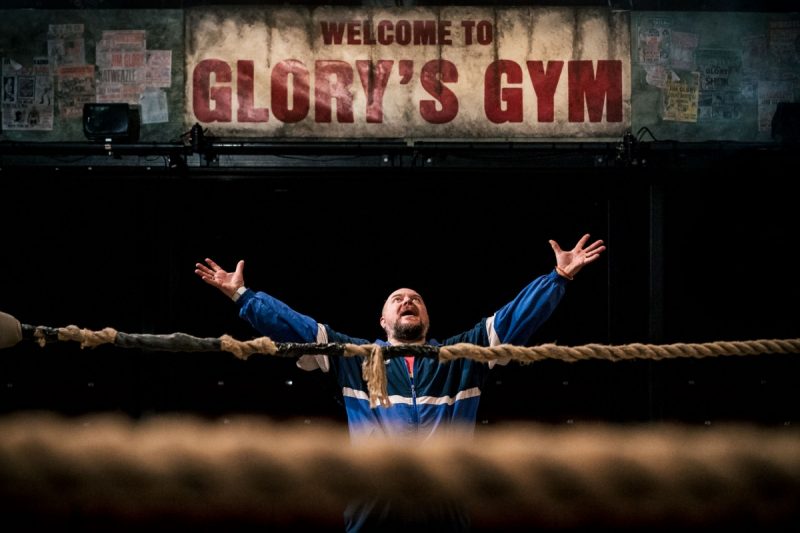 Meet Dan, Ben and Sami – three young men compelled over the ropes and into the ring to wrestle with life, demons and each other in Nick Ahad’s new play Glory.

Coming to Coventry 10-13 April, this sweaty, gutsy, painfully funny production will see the Belgrade Theatre’s B2 Stage transformed into a wrestling ring as they battle it out in Jim “Glorious” Glory’s Gym.

But as the team behind the show were quick to explain, Glory’s about more than just “men fighting and being macho” – although that is a big component…

“Wrestling is an important factor in the play but it’s also about something so much bigger than that,” says Joshua Lyster, who plays Ben, a character struggling to readjust to life outside the military following a devastating loss. “It’s about human behavior, relationships, heartbreak and honour. It’s about guts and glory and the feeling of being on the edge of your seat waiting to see what happens next.”

Playwright Nick Ahad agrees: “So far in my work I’ve been drawn to writing about the contemporary British Asian experience because of my mixed-race English-Bangladeshi heritage. I think with Glory I’m looking a little further into what Britain and being British today means for any minority. With a black British soldier, a British Chinese wrestler and a Syrian refugee as three of my characters, I think this play is an exploration of what it is to be the ‘other’ in contemporary Britain.”

All of the characters, Jim Glory included, are fighting these kinds of issues in their personal lives, with the staged combat they engage in at the gym offering a much-needed release. Dan is a north-eastern lad of British Chinese heritage, angry with the racism he and his family have faced, as well as desperate to make it big and escape his family’s takeaway business.

“Dan’s family have clearly had a hard time in the past, and I think he carries a lot of the burden on his shoulders,” adds Josh Hart. “His memories are built on aggression and non-acceptance, which frustrates him more than anything. Wrestling is a way for Dan to escape the world he lives in and try and live out the person he has always envisioned himself to be.”

Meanwhile, Sami is a Syrian refugee, who has fear and prejudice as well as a language barrier to contend with in the UK. Moreover, although he doesn’t like to show it, his traumatic experiences of war have left him mentally scarred.

“One thing he has in common with all the other men in the play is his difficulty with opening up emotionally, often dealing with his feelings through violence and banter,” says actor Ali Azhar. “He’s also faced with a lack of education in the UK about the complexity of the Arab world, which leads to fear, aggression and prejudice against him.”

Similarly for Ben, wrestling is “a physical outlet for pent-up anger and emotions,” as Joshua Lyster explains: “He’s trying to figure out life after having been regimented and told what to do for a long time. He can go from being tactical and unreadable to fully physically engaged in a matter of seconds… [which] makes him hard to gauge and a little unpredictable… However, as with most people who are cut off from the world, when you dig deep enough you find someone who’s considerate, lonely and misunderstood.” 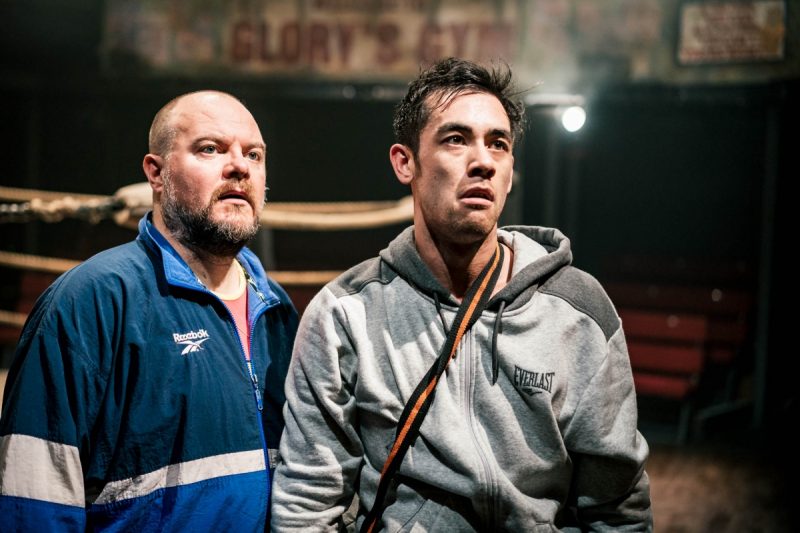 For all its macho aesthetic, it’s this human vulnerability that is at the heart of the show, and it’s something to which the cast hope that audiences of all backgrounds can relate.

“It’s also about normalised racism, and how minorities can be mistreated in their everyday life, sometimes without even noticing. In this play we see men driven to search for redemption and meaning in their life, and I think that’s something that women can connect to as well as men.”

While the cast agree that things in theatreland are changing for the better, with improved representation on stages and initiatives to promote diversity behind the scenes, in the wider context of today’s society, Nick Ahad feels it’s as important as ever to highlight the difficulties that minority communities still face.

“I think the more divided we become, the more important I find it to talk about race and not shy away from the difficulties we face. I don’t advocate stoicism and silence in the face of racism. There’s a part in the play where one of characters talks about the immigrant head bow, a small gesture of trying to make yourself small and quiet in the face of hostility. It’s what my dad’s generation learned to do, but we’re several generations on now and I and my contemporaries refuse to bow our heads.

“Having a voice, a stage, is a privilege and it’s a duty to talk about difficult things on that platform. That doesn’t mean it’s combative, a lot of the play is funny and funny about race. Drama is a brilliant way to raise an issue and humour is a great way to allow it to be discussed.”

Glory is produced by the Red Ladder Theatre and The Dukes Theatre Lancaster as part of Tamasha’s IGNITE programme, supporting emerging producers to develop new work in regional theatres. It is the second play to be hosted by the Belgrade Theatre as part of IGNITE, following on from the Belgrade’s own production Under the Umbrella.

Tickets are available to book now by calling the box office on 024 7655 3055 or visiting www.belgrade.co.uk where prices are cheaper.