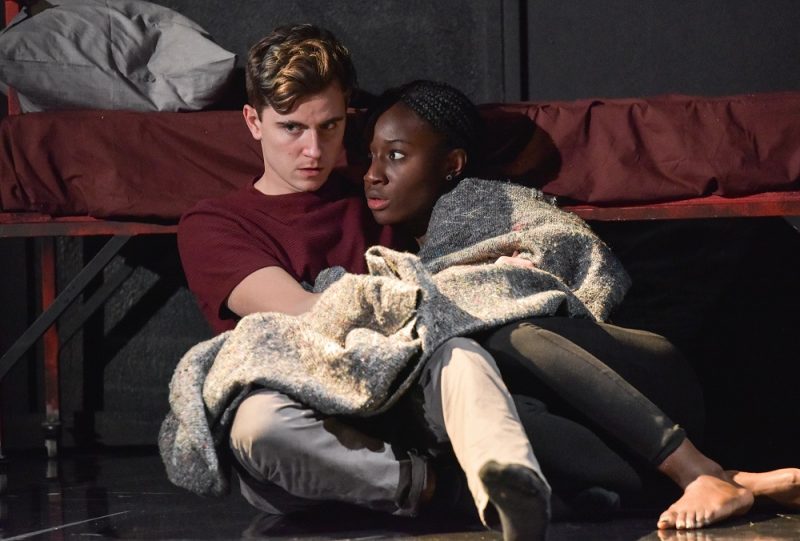 While venues across the UK have temporarily shut their doors in response to the COVID-19 outbreak, the Belgrade Theatre is already looking forward to an exciting new season, offering plenty to look forward to once the lockdown is over.

As well as introducing an exciting digital offer to see us through the rest of the spring and summer, the Belgrade Theatre also launches its Autumn/Winter Season this month, with highlights including the return of its sell-out staging of Noughts and Crosses, a chance to meet favourite kids’ TV characters in Milkshake! Live, and Groan Ups, the latest comedy from producers of The Play That Goes Wrong. Priority booking for Members begins on Tuesday 14 April, followed by general release on Tuesday 28 April.

The season kicks off on Sat 5 Sep with James Rowland’s Songs of Friendship, a revelatory cycle combining storytelling, comedy music and song. Produced by Tangram Theatre, this internationally acclaimed trilogy follows a deeply personal journey through love, death, friendship and the muddles of everyday existence, across three shows: Team Viking, A Hundred Different Words for Love and Revelations.

Fans of new writing can also look forward to Ifeyinwa Frederick’s Sessions from 24-26 Sep, a raw, funny, bittersweet dive into the complexities of masculinity, therapy and accepting our own vulnerabilities, fully integrated with British Sign Language. The show is told through the eyes of 29-year-old Tunde, who worries that he’s not where he’s supposed to be as his 30th birthday approaches.

Themes of mental health also emerge in Lola Chakrabarti’s Calmer, a story of three generations of women, each undergoing their own crises. Co-produced by the Belgrade Theatre and Birmingham Repertory Theatre, this darkly funny, raw and touching examination of love, guilt and family marks the directorial debut of acclaimed actor Adrian Lester, running from 4-14 Nov.

Presented by Theatre Accord and Tara Arts in association with the Belgrade Theatre and The Production Exchange, Anthony Clark’s SHE similarly explores the experiences of a range of female characters from childhood to old age. Showing from 10-12 Sep, this exhilarating sequence is made up of seven short plays, written in a variety of styles, each with its own intriguing twist.

Dougie Blaxland’s Getting the Third Degree will unite sports and theatre fans to tell the story of Laurie Cunningham from 30 Sep-3 Oct, the first millionaire black footballer, the first player of colour to sign to the mighty Real Madrid, and – along with Cyrille Regis and Brendan Batson – the first of the black footballing trio famously dubbed The Three Degrees.

Meanwhile, thrill-seekers should look out for Adam Z. Robinson’s Upon the Stair, a trio of macabre tales combining storytelling, live music and integrated BSL in a thrilling gothic show like you’ve never witnessed before. Showing from 30-31 Oct just in time for Halloween, this haunting show brings to life the ghostly stories of three lost souls all bound to a cursed book.

A Hundred Different Words For Love

From 3-7 Nov, The Classic Thriller Theatre Company are also back with a new production of the chilling black comedy The Cat and the Canary. Twenty years after the death of Mr West, his descendants gather at a remote mansion to learn who will inherit his vast wealth, but when the heir is revealed, a chain of macabre events is set in motion…

After streaming their productions of Ali Milles’ The Croft and Alan Bennett’s The Habit of Art this spring in response to cancelled tour dates, The Original Theatre Company turn their attention to post-Cold War drama A Splinter of Ice from 14-17 Oct. Written by Ben Brown, whose award-winning play Three Days in May inspired the Oscar-winning film Darkest Hour, it sets its scene in 1987, when novelist Graham Greene is finally permitted to meet his old MI6 boss Kim Philby, Britain’s greatest ever spy – and traitor.

Hot on the heels of the recent BBC One TV adaptation, Malorie Blackman’s Noughts and Crosses returns to the Belgrade from 7-10 Oct, this time showing on the Main Stage. Co-produced by the team behind Crongton Knights, this story of love and racial division played to sell-out audiences and critical acclaim during its first UK tour in 2019.

Those seeking something light-hearted to lift their spirits can look to Groan Ups, the latest chaotic comedy from Mischief Theatre, creators of The Play That Goes Wrong, The Comedy About A Bank Robbery and BBC One’s The Goes Wrong Show. Expect even more of the company’s trademark madness and mayhem when this side-splitting show heads to Coventry from 28 Sep-3 Oct.

If social distancing has left you Netflix bingeing, you might enjoy The Crown – Live!, a brand new parody stage show inspired by the hit series. From 23-28 Sep, two actors reimagine the story of how Elizabeth Windsor became Queen Elizabeth in 90 minutes of frenetic hat-passing, period accents and hilarious corgi impressions.

As ever, there’ll be a sparking Christmas celebration with this year’s panto, Beauty and the Beast showing from 28 Nov-9 Jan, but the festive fun doesn’t stop there! Following the return of Russian State Ballet with The Nutcracker, Sleeping Beauty and Swan Lake from 12-14 Nov, Imagine Theatre present another preschool-friendly production, with Santa’s Christmas Rescue showing from

As well as theatre, there’ll also be live music from Coventry’s very own Hazel O’Connor on Tue 10 Nov, Fascinating Aida on Sat 31 Oct and an eclectic mix of tribute artists, plus a chance to sing along to your favourite movie musicals with Sing-a-Long-a screenings of The Greatest Showman and The Rocky Horror Picture Show on Sat 23 Jan.

Other shows to look out for include An Evening of Burlesque on Sat 5 Sep, the return of the popular Circus of Horrors on Wed 11 Nov and a hilarious adult pantomime in Sleeping (with) Beauty on Sat 12 Sep.

Tickets to the Belgrade Theatre’s Autumn/Winter Season will go on sale to Members at Gold level and above from Tuesday 14 April, followed by general release on Tuesday 28 April. For more information and to book, please visit www.belgrade.co.uk.

Please note that bookings are currently online-only while our building is temporarily closed.