Step Back in Time: Fes 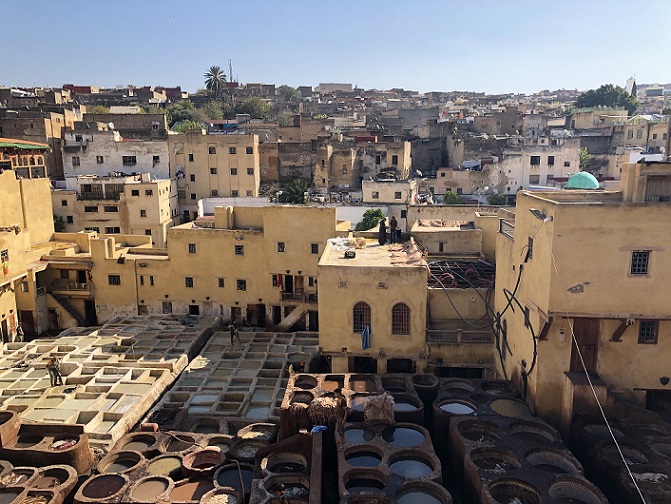 A stalwart on the hippy trail back in the Swinging Sixties and known as the ‘Paris of the Sahara’, Morocco lies in the northwest of Africa and directly in line with the straits of Gibraltar. It’s a country reaching for the future but steeped in the past. It’s a fascinating juxtaposition that will leave you wanting more, as Kevin Urquhart discovered recently when he visited the ancient city of Fes.

Fes is Morocco’s oldest city. Just two and a half hours flight into Fes Saiss airport with Air Arabia, you could have been transported back two and half thousand years into a biblical setting with tiny, oppressive cobbled streets in a bewildering maze; spluttering street lighting and thousands of anonymous doorways.

Not for the faint hearted nor the lily-livered jetset wanting a sanitised cocktails and chill holiday, visiting and staying in Fes is an assault on the senses and, to get the very most out of your experience here, we’d urge you to employ the services of a local tour guide. Without them, you simply will, without question, get lost. So labyrinthine-like is Fes that even Google gave up on trying to geo-map it. 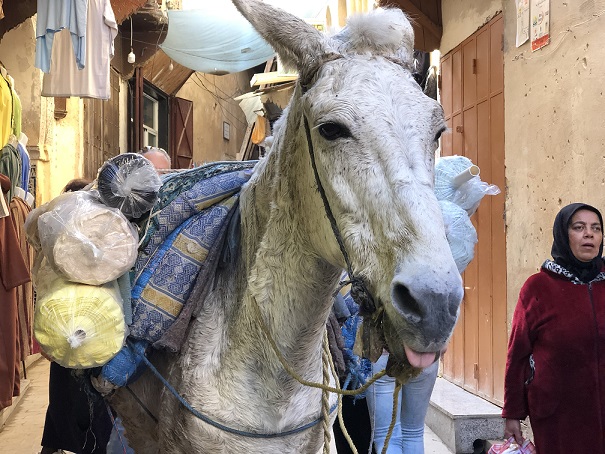 It’s very clear, very quickly why this city is of such significance: it’s Morocco’s oldest walled town or medina – 1200 years old to be precise. 600,000 people live here and it’s the site of one of the oldest universities in the world – 859AD, founded by Fatima. There are no cars – everything is transported by donkey and cart; no machinery – everything is hand or sometimes, foot crafted and the preferred method of healthcare is traditional herbal remedies and potions sold on stalls within the souk. Our guide tells us that the Medina operates as a co-operative society where money is earned and recycled within its protective walls. Despite popular belief, it’s a matriarchal society where Mama runs the house and the kids, and where the men are sent out to work and provide for the family. It’s a long-held tradition in Fes that the larger the family, the more chance you have of survival, but the lack of support system is painfully evident at times primarily by the large numbers of beggars visible throughout the city.

A relatively poor city compared to Marrakech or Rabat (the capital), Fes is home to 272 mosques, numerous palaces and is considered to be ‘living history’. And this is why you must forgive
it the occasional stench of urine, the donkey poo on the floor, the unpredictable street lighting and gaping crevices in the pavement. It is an industrious city and one with a good heart.

If you are shy, retiring and easy to convince, this isn’t the city for you – or at least not as a solo traveller. The persuasion skills of the traders are relentless, but not without humour. Be prepared to barter. That said, we had been told that goods could be bought for 75% less than the opening gambit, but we struggled at 50% as the traders are fiercely proud that everything they sell has been handcrafted here in Fes. 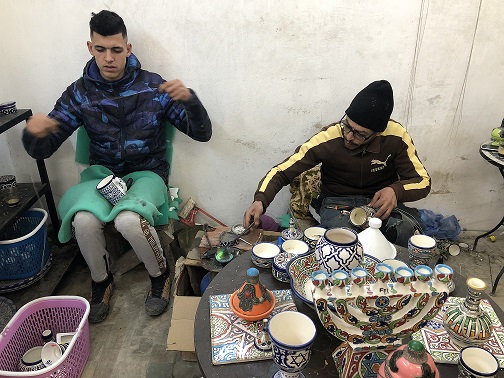 That said, you can bag some bargains at the 13th century Widows Cooperative. Here, over 1365 women – divorcees or bereaved – weave the most magnificent and colourful rugs and Berber carpets, some of which can take years to create. So highly regarded are they that buyers from stores such as Harrods will buy here – at a fraction of the price they then sell them on for (for example, a hand-woven rug may cost the equivalent of £1500 in Fes, but can be retailed at more than £12,500 in UK). This Widows Cooperative has UNESCO protection specifically and is a mustsee. Handily, DHL can ship your purchase home for as little as £60.

Another must-see is the Tannery. Be sure to accept the sprig of Mint you are offered as you enter, as the smell is heady – and even more so in the summer when temperatures in the Medina can reach more than 40-degrees. This blistering heat is also why the houses in the Medina are so tightly packed – to create natural air-conditioning even in the height of the midday summer sun.

Here, you are given a birds’ eye view of how animal skins are prepared and dyed for eventual use in clothing and textiles. You’ll see more than 270 men employed in back-breaking work, transforming the fresh-from-the-slaughter-house skins into soft, supple and highly coloured leathers ready to be transformed. This truly is a breathtaking experience and one unlike anything you will have seen outside of Fes. As you’d expect, you can buy these leather goods: wallets, purses, bags and clothing here, too.

Although aspects of Fes can be a little basic it does have its luxury side too. We stayed at Riad Fes, a luxurious retreat in the heart of the Medina. Riad Fes comprises five buildings dating from 1890 but redeveloped as one complex and behind an anonymous wooden door.

Each of the former buildings offers a different architectural style and finish, built around an internal courtyard with tinkling fountains, courtyard swimming pool, spa and tropical gardens.

Fez is, quite literally, like stepping back into time. It’s maze of fragrant streets with kittens playing in the dirt; the beasts of burden ferrying rugs in and out of the walled Medina and good-natured haggling. It is how it is done. How it was done before. And how it will continue to be done. 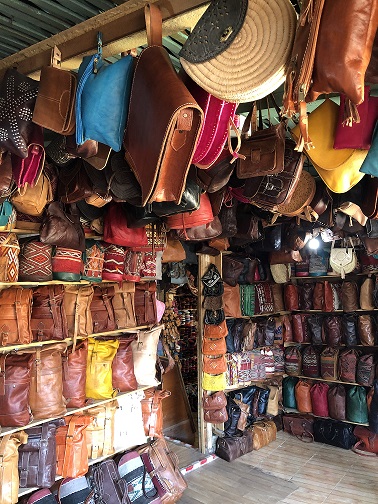 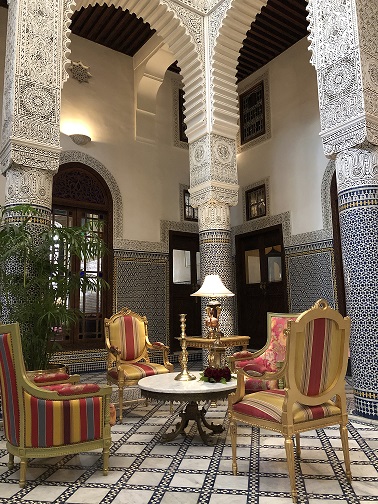 We flew with Air Arabia. Air Arabia operates direct flights to and from London Gatwick to Fes and Marrakech twice weekly, with prices starting from £51 one way www.airarabia.com/en

Air Arabia (PJSC), listed on the Dubai Financial Market, is the Middle East and North Africa’s first and largest low-cost carrier (LCC). Air Arabia commenced operations in October 2003 and operates a fleet of 55 new Airbus A320 and A321 Neo LR aircraft, serving over 170 routes across the Middle East, Africa, Europe, and Asia.

We stayed at Riad Fes in Fes. Room rates start from £150 off peak www.riadfes.com