Forget all of those, this February is packed full of amazing events across the Midlands and we’ve got you covered with our top picks!

Critically acclaimed comedian and host of Vice’s Hate Thy Neighbour and Channel 4’s Adventures in Futureland, Jamali Maddix is heading out on tour again after his incredible 2018 World Tour

After our sold out ‘Winter Special’ they’re back at the end of January to give a small glimpse at life inside the walls of El Dorado Festival! This tour will sees them venture into the depths of the golden cities jungle, where the rocky remains of ‘The Lost Ruins’ lie. Travelling with fresh decor, performers and production all of the highest calibre, this is not one to be missed!

Miz Cracker’s brand new show, American Woman, will take the venue by storm with a witty and informative comedy show made for women from every background as well as the men among us. The RuPaul’s Drag Race star will use comedy and performance to open a discussion upon the way in which drag queens and gay men can become better allies to women in an age where feminism is more important than ever!

West coast rap legend and actor, The Game, is kicking off 2020 by hitting venues across the UK on his Born 2 Rap Tour.

ASKING FOR IT
until 15TH FEBRUARY @ Birmingham Repertory Theatre

Landmark Productions and The Everyman’s sensational adaptation of Louise O’Neill’s devastating novel about sexual consent makes its UK première at The REP following huge acclaim, including a sold-out season at Ireland’s National Theatre, The Abbey.

GRAMMY Award-winning R&B singer, Ashanti, returns to UK stages to perform some of her biggest 00’s hits, including the iconic anthems, ‘Foolish’ and ‘Rock Wit U (Awww Baby’).

Material Men redux is a dazzling performance which illustrates two very different styles of dance. With the juxtaposing styles of hip-hop and classical Indian dancing, the two dancers Shailesh Bahoran and Sooraj Subarmaniam are connected through their Indian heritage aroynd together they explore the dark realities of their past.

Created to mark the 25th anniversary since the demolition and 30 years since the rise of UK rave culture, WASTELAND is the highly anticipated new dance theatre show from acclaimed British choreographer Gary Clarke and the sequel to his multi award winning production COAL.

Rob Beckett is back on tour with a brand new stand up show. It’s been a busy few years for the Mouth of the South and he’s coming to see you to fill you in and make you laugh.

One of the best-loved operas of all time, Madam Butterfly’s glorious music and tragic heroine have enchanted audiences for more than a century. This ground-breaking re-imagining of Puccini’s masterpiece will be told from a female, East-Asian perspective, performed by a diverse-led cast of talented singers and musicians.

Crongton Knights will take you on a night of madcap adventure as McKay and his friends ‘The Magnificent Six’ encounter the dangers and triumphs of a mission gone awry.

A total sell out for the past six years. The UK Pun Championships returns to De Montfort Hall as the culmination of #UKPunDay. A celebration of the great British pun featuring comedians from across the UK.

After an unstoppable run of summer festivals, the tour will be fans’ next chance to witness the star in action and hear the album in all its glory, so make sure you catch her while you can!

A sell-out before its world première tour opened in 2016, Matthew Bourne’s triumphant adaptation of the legendary film returns to Birmingham Hippodrome, having won two Olivier Awards and dazzled audiences and critics across the UK and the USA.

Marking their 25th anniversary as a band this year, Bowling for Soup are returning to their home away from home for one of their biggest UK runs to date.

One of the most innovative, interesting and pioneering artists to come out of Britain in recent years, the dates will see him perform his most ambitious and personal work to date, commanding your attention from start to finish. 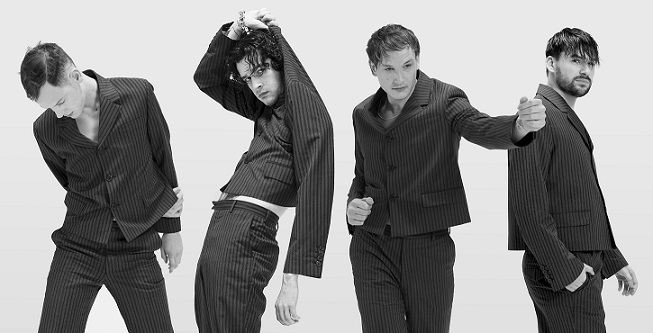 Having headlined this year’s Reading & Leeds festival, The 1975 will tour the UK & Ireland in February & March 2020. These shows will be the first full production shows of the new ’Notes On A Conditional Form’ era.

Holes is the brilliant, inventive and creative new stage show based on the multi-award-winning novel and the Hollywood blockbuster.

Now in its fourth year, Verve has become synonymous with a lively and celebratory approach to programming poetry of every kind. From raucous performance poetry and quiet reading events to studious workshops and open mic, the programme encourages audiences to see their favourite poets and to try something new – to join in, create, listen and learn.

Following the release of their critically acclaimed album, Social Cues, the GRAMMY Award-winning indie-rock band, Cage The Elephant, return to the UK for their first headline shows in three years.

A riotous farce that’s full of laughter, Moonlight and Magnolias takes you behind the scenes as three movie masters set about creating one of the biggest Hollywood blockbusters of all time, Gone With the Wind.

Following a five-star sell-out run at Edinburgh Fringe, CSI: Crime Scene Improvisation returns to Leicester with a rip-roaring crime comedy made up entirely on the spot. A fully improvised, witty and absurd murder mystery.

Singer, rapper, producer and king of club bangers, Example, is embarking on his first headline tour in six years, performing all his biggest hits as well as material from his latest project, Bangers & Ballads. The longest set he’s ever played, these monstrous live shows will be a high-energy experience celebrating the highlights of his career.

The Phantom of the Opera
22nd February – 21st March at Curve, Leicester

The Phantom of the Opera tells the tale of a disfigured musical genius known only as ‘The Phantom’ who haunts the depths of the Paris Opera House. Mesmerised by the talents and beauty of a young soprano, Christine, the Phantom lures her as his protégé and falls fiercely in love with her. Unaware of Christine’s love for Raoul, the Phantom’s obsession sets the scene for a dramatic turn of events where jealousy, madness and passions collide.

BRIT-nominated British DJ, producer and artist Sigala, off the back of his sold out 2018 UK headline tour, has announced details of his biggest world tour to date.

Following their multi award-winning success with The Play That Goes Wrong and The Comedy About A Bank Robbery, Mischief Theatre return with their riotous spin on a timeless classic, the West End smash hit Peter Pan Goes Wrong. The members of the Cornley Polytechnic Drama Society are back on stage, battling technical hitches, flying mishaps and cast disputes as they attempt to present J.M Barrie’s much-loved tale. But will they ever make it to Neverland?

The darkly compelling tale of Doctor Faustus, inspired by the works of Marlowe, Goethe and other versions of the Faust Myth. In this radical retelling, Johanna Faustus makes the ultimate sacrifi ce and sells her soul in order to time travel across the centuries and change the entire course of history. But can she now escape eternal damnation?

As You Like It
27th February – 5th March @ Theatre Royal Nottingham

An imaginative new take on Shakespeare’s riotous comedy As You Like It, directed by Kimberley Sykes. Come on a journey of laughter, romance and self-discovery.

She’s toured alongside Anne-Marie, The Chainsmokers and 5 Seconds of Summer, but now rising singer, Lennon Stella, is set for her own headline run. The tour comes off the back of single ‘Kissing Other People’ and will give fans a taste of what to expect from her forthcoming debut album.

James Wilton Dance, one of Europe’s most in demand dance companies, present The Storm, a whirlwind of lightning fast, athleticism, where acrobatics, break-dancing, martial arts and contact work fuse to form dance that will blow audiences away.

The UK’s most magical club night returns and this time they’re taking you on a fantastic voyage to the Cosmic Circus, with colourful aliens and intergalactic décor.